Posted on January 27, 2012 | Leave a comment
Diabetes has been on the minds of a lot of people lately, most notably Paula Deen. Last week there was a bit of a hubbub over Deen’s coming out about her diabetes. I have to admit that I agree with her critics, probably the only thing I will agree with Anthony Bourdain on, for slamming her. No matter how you look at it, she was knowingly peddling the same food that most likely made her sick. And she did it for 3 years.

Diabetes is no joke though.

According to the American Diabetes Association’s 2011 National Diabetes Fact Sheet, 25.8 million children and adults in the US have diabetes. In addition there are 79 million people with prediabetes. Add that up my friends and it equals a full third of the US population. And if you’re wondering how much of that is people with Type 1 Diabetes, formerly know as Juvenile Diabetes, that’s only 5% of this group.

A full third of the country with the increased risk of the following complications due to their diabetes:

Back to Paula, instead of making a slow and gradual change to a healthier diet – come on in 3 years she could have gone raw vegan and people wouldn’t have noticed. Seriously though, In that time she could have helped her fans adopt healthier eating habits and by doing it slowly they would have a better chance of succeeding and making it a real lifestyle change.

Shame on you Paula, I’m not going to talk about the Novo Nordisk Victoza deal because I understand a girl has to make a living… but at what price?

Preheat oven to 400. Dice the potatoes and peel, chop de-seed the acorn squash. Roast until soft about 40 – 60 min.

While the veggies are roasting heat 1 tsp of coconut oil in a large saucepan and add the onion. Cook until soft then add the garlic. Cook for a few minutes making sure not to burn the garlic. Add in all of the beans, the mushrooms, 1/4 cup purified water, the soy sauce or liquid aminos, the thyme and pepper to taste. Simmer until the mushrooms are soft. In a bowl mix the 3 tablespoons of arrowroot in enough water to dissolve and add to bean mixture. Once it is well incorporated add the frozen vegetables and let simmer for another 5 minutes and shut off heat.

In a mini chopper or food processor process the toasted bread slices into breadcrumbs. If you don’t get a cup’s worth then toast more bread and repeat.

In a large bowl combine the potatoes, acorn squashes, 1 tsp coconut oil, almond milk, the 1/2 tsp salt and pepper. With an immersion blender blend until smooth, you can also transfer to a blender or use a potato ricer or masher.

Grease a casserole dish with the remaining coconut oil and line the bottom with the breadcrumbs. Then layer in the bean mixture and cover with the mashed potato/acorn squash mixture. Bake for 40 minutes at 400 until the top layer has a golden color to it.

I like to eat this with nutritional yeast and sriracha sauce. YUM!

A colleague of mine suggested or rather challenged me to unplug for 24 hours. I was complaining that I wasn’t getting great sleep and felt like my brain was on overload. So she wanted to see if unplugging would calm the mind. For 24 hours I was going to give up my iPhone, iPad, computer and TV. Yes TV too!

We picked January 16th since it was a holiday and would be an easy day to be unavailable. I was OK going without the gadgets, I wasn’t too gadget heavy during my holiday break but the thought of no TV was tough. My favorite way to spend a holiday is in front of the TV cuddling on the couch with the boys and Lola in my lap. 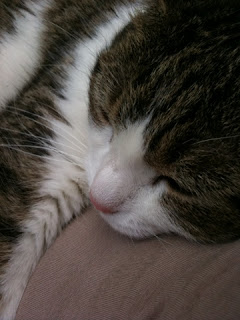 I decided to create a plan beforehand to make sure that my day was full. I had a list! I also had a list of things to do when I was back online, wow you don’t realize just how plugged In you really are until you lose it.

Cleaning up after our annual Regifting party was a no-brainer. Catching up on some reading was pretty obvious too but the one thing that I saved for my unplug day was my vision board. 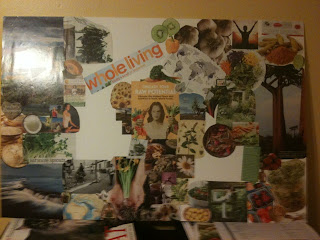 I really enjoyed working on it. I was also able to go through a few more magazines and add more photos. The images are really in categories: mind/body; healthy food; learning and the world. To show mind/body I have plenty of meditation and yoga photos, even a set of great abs. The healthy food is pretty obvious, beautiful photos of food I love, including coconuts which I intend to conquer this year, that means open a young Thai one myself. I also included ads from the Natural Gourmet Institute and Living Light to continue my education. I included images of the world and beautiful places. I think to fully live life you have to be aware of the world out there. And while I accept that my lifestyle sometimes strays from the average I am very aware that there is an entire world out there waiting for me. 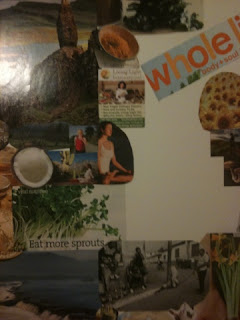 As you can see I still have open space on my vision board. Like me it’s still a work in progress. I won’t know what I will be adding until I see it and it resonates with me. But you better believe it’s going to be something good. I just hope I don’t wait until I unplug again to find out.

In a bowl with a spoon mash up the avocado, mix in the condiments and juice and add salt and pepper to taste.

Posted in Recipe, Vision Board

This past weekend I lead a group cleanse, it was a 5-day cleanse that is now morphing into a 21 day cleanse for a couple of us. I like to cleanse. The first one I ever did almost 2 years ago resulted in my going vegan. I felt so good that I didn’t see the point in adding back the animal products. My last cleanse helped reduce my 2 biggest nemeses: Alcohol (aka wine and beer) and Gluten (aka lots of bread, especially Jared’s homemade)

The cleanse that I am doing now has me looking at food in 2 categories: Cleanse-Worthy and Not Cleanse-Worthy. I try to stick to the cleanse-worthy foods. It’s not easy though, my beloved raw cacao with it’s caffeine is not cleanse-worthy. I did for the first time have a square and a half tonight of the Endangered Species chocolate (72%) meh, I don’t know if I am a raw chocolate snob or what but it really didn’t do anything for me. I much prefer the nibs on a bowl of fruit, in a smoothie, raw desserts or even in baked goods.

Also since this was a bit of an adrenal cleanse I removed oranges and bananas, well it’s day 6 and I am adding back in oranges or at least seeing how they make me feel. The one I am eating right now is not yet half way through and already making me feel stuffed… it’s not a very good one either so it’s not making want to finish it.

There are a couple of cleanse-worthy foods that I haven’t had like grains and beans. I’m trying a more raw approach this time around and it’s working well. I have to admit I do feel better not having them, however, I am concerned about eliminating them entirely as they do have their health benefits. I think if I make one of my one-pot meals and add a cup a day to a salad it would be OK. Since these are foods I tend to overeat it will help to control portions.

2 Small Zucchinis Spiralized or Julienne Cut on a Mandolin

Put everything from the carrots to the tahini in the food processor and process until smooth. Mix in the tomatoes, olives and fennel seeds. Add water to thin out to desired consistency. Mix well with noodles and serve.

I have three passions: wine, cycling, travel, family, and math.

Yes, I am Vegan

Easy green living for the passionate but lazy!

for people who think about food as much as I do

I don't pump my own gas

In Vegetables We Trust

Home to over 200 vegan recipes.

Vegan-Friendly Stories for all ages

Learning to Create A Better Future